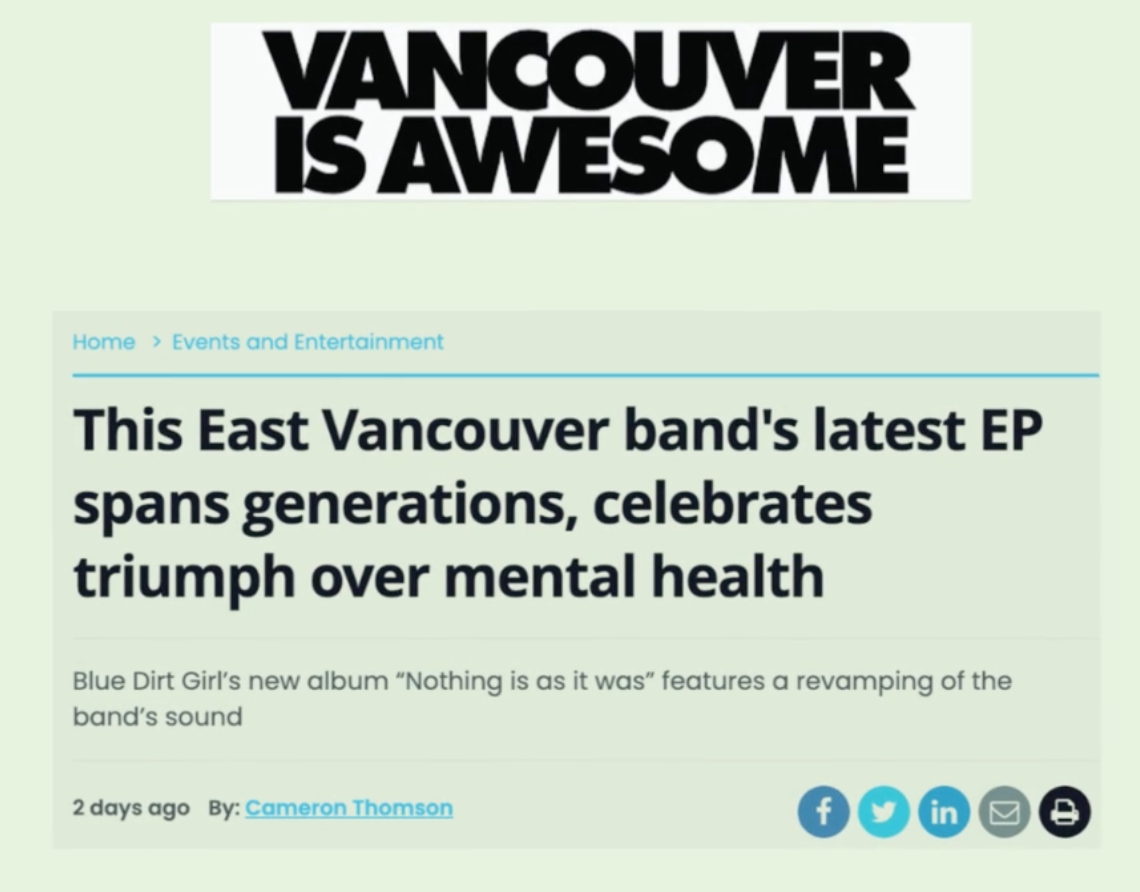 Thanks to reporter, Cameron Thomson, for his insightful review of my
“Nothing is as it was” EP for Vancouver Is Awesome newsletter.
(May 8,2021)

The band’s most recent EP Nothing is as it was dropped March 19th and features an almost entirely new sound.

The saxophones, hand drums and calypso rhythms of Crazy Beautiful were replaced by steady rock grooves, dirtier guitar solos, and a general nod to Sutherland’s most formative musical decades: the 70s and 80s.

“I knew I wanted something different and I am in love with my wah pedal and whammy bar right now.” Kathryn said in a recent interview with Vancouver is Awesome.

The album derives its title from a line in the EP’s second track “I Don’t Mind”. Kathryn said she wrote the lyric “nothing is as it was” for the tune after coming out of a depressive period in 2019.

In August of 2020, the EP’s four songs were recorded with an extra member, Grade 11 student Max Evans who Sutherland described as a “60-year-old pro lead guitarist locked in a 17-year-olds body.”

“I knew magic was happening,” Sutherland said of the studio recording experience. “It was three days, 32 degrees, no air conditioning and it was just magic.”

Other artists who brought the EP to life included Kiki Yee, an East Vancouver artist who created original sketches for the album’s cover and singles. Josh Klassen from Vancouver Island was also commissioned to create four reaction painting videos for each of the EP’s tracks. Four more young Canadian artists were also involved in creating music videos for each song.

Due to the coronavirus (COVID-19) pandemic, Sutherland says the EP’s release was a tad bittersweet.

“I was overjoyed and then I came down a bit because I couldn’t do a release which I really wanted to do with the guys and Max,” she said adding she performed the songs, solo , at an EP release virtual show instead.

If you dig the Blue Dirt Girl’s latest tunes you’re in luck.

The group is back to rehearsing online and is continuing along the path of this new sound.

To listen to more of the band’s work you can check out the website or on  Spotify.”