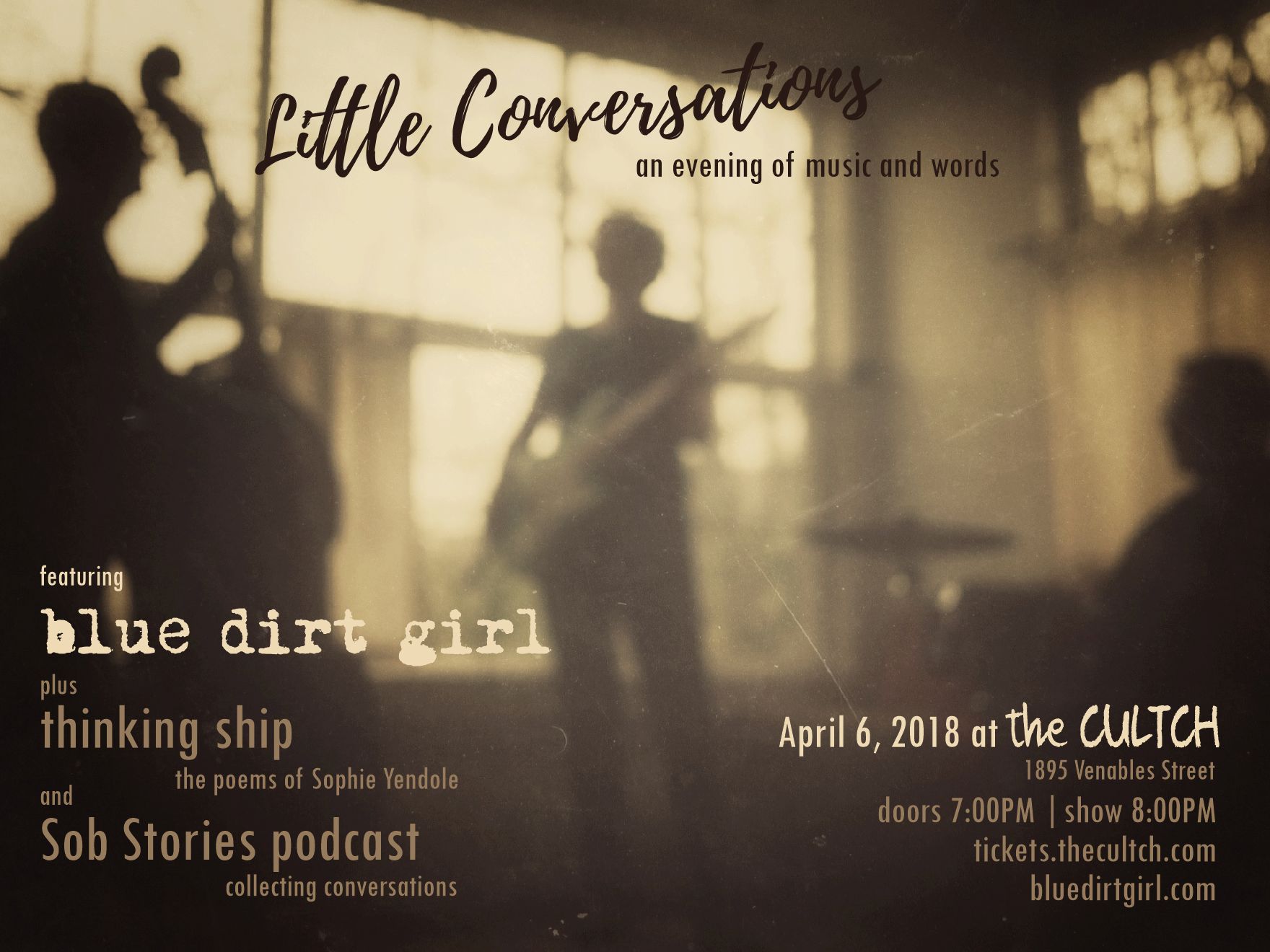 Little Conversations: an evening of music and words
Finding connections between songs, poems, and conversations

(Vancouver, BC) – On April 6, 2018, at The Cultch, you have the rare opportunity to listen in on the conversation between three fiercely talented artists. This collaborative event features the music of East Van trio blue dirt girl with Sophie Yendole, the poet behind Thinking Ship, weaving her words between songs, while Sob Stories podcast collects conversations with the audience in the Founders’ Lounge.

Whether they’re in-depth talks or brief exchanges on the street, conversations are how we reach out to others, connect the disconnected. Through her music, blue dirt girl’s Kathryn Sutherland examines all of her conversations—from her working and writing sessions with her bandmates, to the regular Friday morning discussions with the women behind Thinking Ship and Sob Stories, to the spontaneous chats she has with the people she meets throughout the day. Out of these little conversations came the inspiration for this show.

Aiming to break down the barriers between the performers and the audience, blue dirt girl will play an intimate set while the poems of Thinking Ship provide thoughtful response. Audience members are invited to engage with Sob Stories podcast who will be recording conversations in a sound booth in the Founders’ Lounge.

Learn what blue dirt girl has known all along: start a conversation . . . it’ll change your day.

blue dirt girl is Kathryn Sutherland on lead vocals and electric guitar, Albert Klassen on stand up and electric bass and vocals, and Jason Overy on drums and percussion.
After collaborating on and off for 17 years, Kathryn formed blue dirt girl in 2016 and recorded their first album, Crazy Beautiful in 2017. With a sound that moves from swing to pop and back again, blue dirt girl pulls it all together with a jazzy vibe and Kathryn’s soulful vocals.

“I LOVE your music! It was all such a delight … It reminded me of the genuineness and open sweetness of Jane Siberry concerts, of which I went to many many in the 80s,” concert-goer Leslie H

Special guest vocalist, ukulele player Moira Chicilo will be sitting in on various songs through the evening. Moira, my cousin,  and I wrote songs through various conversations about the strong, intriguing women in our family lineage.

2018 MARCH update our original cover of Little Conversations is up at bluedirtgirl.com Music page, Spotify, iTunes and all other streaming services.